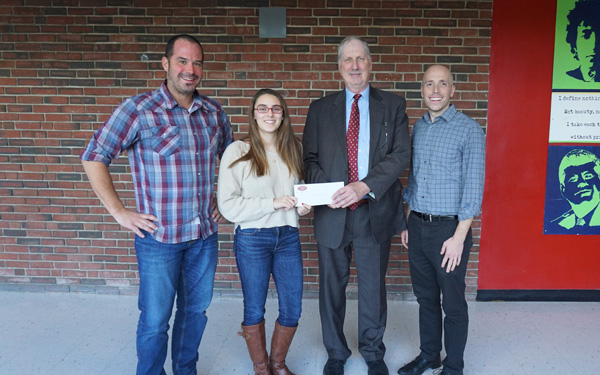 Ms. Owen was selected to receive the award by the WHS Art department for her television production skills in class and drive to take on extra credit opportunities. “With a focus on collaboration, Heather’s quality of production has consistently grown with the support of fellow classmates who look to her as a leader,” said Joy Schilling of the WHS Art Department. “Her great attitude is infectious and makes doing a shoot fun. While many students start off in TV1, only a select few make it to TV4. Heather has been the TV department’s go-to producer over the past four years.”

In TV1, students learn the fundamentals of television production including editing, manual operation of the camera, audio acquisition, lighting techniques and lens theory. They practice these concepts by creating basic projects such as "How to" videos in school. While working in groups, students will write a script, assign roles, rehearse the shots and then record the project.

As students progress through the TV program, they learn how to put all the pieces together to make something that people want to watch. They incorporate the "how to make a video" along with the importance of meeting deadlines, pre-production planning, designing an effective shooting schedule, conducting in-depth research and coordinating interviews. WHSTV uses their YouTube channel to showcase student work.

As they advance through the program, students have the opportunity to record outside school productions.  These productions range from sporting events and administrative presentations to concerts and award shows.  The students gain extra credit and the experience of recording when they take the equipment that is used in class, go out into the field and record.

“Heather is a highly value member of the Visual Arts Department at WHS; we are very proud of her accomplishments and wish her the best of luck moving forward,” said Schilling.